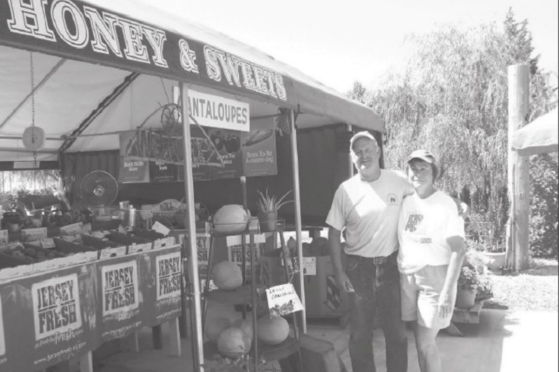 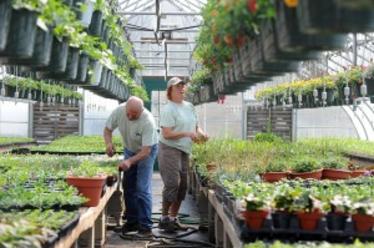 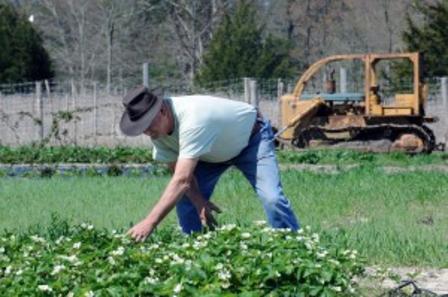 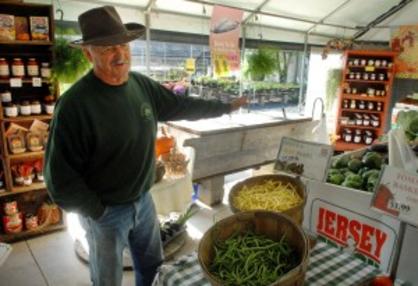 Honey and Sweets Farm Stand in the news!

Co-owner James Van Daley, of Galloway Township, talks about the produce
available this time of year at Honey and Sweets farm stand, in Port Republic.
Thursday, October 20, 2011.(The Press of Atlantic City/Danny Drake)

“I’m here a couple times a week,” the Little Egg Harbor Township woman said. “The quality is better, and the price is better, and I like to give the local farmers my business.”

Engels is among a growing number of South Jersey “locavores” —people who prefer their fruits and vegetables Jersey Fresh and stock up from the spring to the fall when they are most available. And that growing demand for local produce has led to growth in the number of farm stands, which have increased significantly statewide during the past decade, to about 150 this year, the state Department of Agriculture said.

While most of those stands and community farmers markets are closed or wrapping up their seasons now, with only a handful open past Thanksgiving, farmers, food marketers and scientists have been working to make New Jersey-grown products available year-round.

“It’s really a solid three seasons of produce, and there’s a movement to even extend it to four seasons,” said Lynne Richmond, spokeswoman for the NJDA.

At the Rutgers Food Innovation Center in Bridgeton, researchers have been working to create healthy, tasty and locally grown products for school cafeterias, which is especially important since schools are in session when farms are least active.

Whole grain blueberry muffins, eggplants stuffed with ricotta cheese and greens, vegetable purees and yogurt mixed with local cranberries and beets are some of the concepts researchers have come up with for taste testing next year.

“This way they can tap into New Jersey produce any month of the year,” said Diane Holtaway, associate director of client services at the center.

“The project is really a win-win-win for our farmers, students and food service providers,” she said. “Many schools are already using Jersey Fresh products, but as you can imagine they’re not widely available year-round.”

Companies have been finding ways to market Jersey Fresh produce year-round as well.

Violet Packing, in Monroe Township, Gloucester County, puts Jersey tomatoes into sauce for sale all over the state.

Zone 7 Produce takes fruits and vegetables from local farms —such as Little Buck Organic Farm in Hammonton and Flaim Farms in Vineland — and finds ways to sell them in restaurants and farmers markets year-round.

To extend the season, Zone 7 uses vegetables from the Parzanese Brothers farm in Hammonton, for example, which stores its sweet potatoes through the winter. It also gets produce from Jah’s Creation Organic Farm in Egg Harbor Township, which has a community supported agriculture operation that grows and harvests vegetables in greenhouses in the cold months.

“We’re really trying to keep local products available to customers, to chefs and restaurants that want this stuff,” Mikey Azzara said, “and there’s no doubt that if we can keep this stuff available for farmers that it’s going to help their bottom line.”

Azzara said that Paradise Hill Farm, a cranberry grower in Southampton, Burlington County, is another local farm that supplies crops through the winter. The company freezes the berries, then thaws, dries and sweetens them when needed.

Freezing product has been particularly beneficial for blueberry growers, since the small frozen fruit is popular in everything from cereal to ice cream.

“It’s a product that does freeze well,” said Ben Casella, a field representative with the New Jersey Farm Bureau. “That’s kind of exclusive to that industry.”

Of course, people have historically processed or preserved their fresh vegetables for use during the five or six months when none are available. They have canned, frozen, pickled and cured what they picked during the spring, summer and fall.

“A lot of people don’t do that anymore,” said James Van Daley, co-owner of Honey & Sweets Farm Market. “Now they only know the can opener.”

The modern global produce market makes any food items available any time of year, shipping it in from whatever hemisphere is growing it at that time.

During the summer, most area supermarkets offer locally grown produce. They have done so increasingly, both to satisfy local demand as well as provide cheaper, better quality foods.

“You can’t do anything better than what we can provide when we have it,” said Bill Walker, agricultural marketing specialist with the NJDA.

During the winter, though, that same produce can come from all over the country and the world, leaving locavores with less selection.

“I’m at the whim of ShopRite,” said Engels, who said she used to can produce but has not been able to do so in recent years.

Van Daley’s farm stand sells only New Jersey sourced produce throughout the year, much of it from the fields just behind the market.

On a recent afternoon, he still had a variety of vegetables growing, such a broccoli that was just sprouting, nearby black eyed peas and some abnormally large radishes.

“We call them ‘Jim’s Famous Radishes,’“ he said with a smile. “I don’t know what’s in this ground. I’ve grown them for years and I’ve never been able to get them this big.”

Van Daley’s farm stand closes Oct. 30, but he said that items like spinach, kale, leeks and lettuce, which he doesn’t sell, would be available into November.

After that, it would be another six months until the first asparagus would start hitting farm stand shelves.

But he said he had plenty to keep him busy in the meantime, pointing to the greenhouse nearby that he had to finish building before next season.

Jim Van Daley of the Honey & Sweets Farm Stand in Port Republic
looks over strawberry plants that are flowering at his farm.
Sunday , April 24, 2011.(The Press of Atlantic City/Anthony Smedile)

The first asparagus of the season stood in ice water Sunday at Honey & Sweets Farm Stand. Jim Van Daley hoped there would be some left at the end of the day so he could try it.

The arrival of the spring vegetable, sold at the Chestnut Neck Road stand in Port Republic and grown at Walker's Farm Market in Pittsgrove Township, Salem County, helps mark the start of locally grown produce being available in the region this year.

Honey & Sweets opened their market April 13, and soon they will fill their stands with fruits and vegetables from their own fields and  throughout southern New Jersey.

"Ninety-nine percent of what we sell here is from Jersey," said Van Daley, who has run the farm and market with partner Heather Miller since 2004.

Some of the area's produce may hit shelves later than usual this year, since soggy fields prevented some growers from planting when they normally would.

"Recent wet weather has continued to procrastinate some growers' desires/abilities to get seed or transplant into the soil since some ground has been too wet to work with heavy farm equipment," said Bill Walker, a marketing specialist with the state Department of Agriculture, in a report to the industry about crop availability.

Overall, it looks to  be a relatively normal year in terms of quality and availability, Walker said.

But farmers also are looking at their bottom lines this season, as gas prices have made not only fuel but all petroleum-based products more expensive. That includes everything from fertilizer to chemicals to cardboard with wax.

"That affects everything we buy," said Ralph Formisano, of Formisano Farms in Buena. "It's not pessimistic, it's realistic."

"All our inputs are up, so this year we need pretty good prices just to come out," the vice president of Sheppard Farms said.

That depends on supply and demand. For example, he said, a bad crop of lettuce in California could mean higher prices and higher profits for local growers.

Van Daley and Miller have to walk only a few feet from their fields to where they sell their products.

The two retired Galloway Township residents started their business looking for something to occupy their time, and every year since it has grown.

"It's a hobby that got out of hand," Van Daley said.

Van Daley grew up on a farm in Galloway and has always had a garden, so it was a natural transition, he said.

Miller, who is originally from England, had less of a background in farming.

"I just liked to play around in the dirt," she said, but she attended seminars and researched the best techniques for growing flowers.

The two feature a variety of locally grown products. Already available are a colorful assortment of flowers, more than 20 types each of tomato and pepper plants, blueberry juice from fruit in Hammonton and locally made honey and apple jam.

They specialize in growing pole lima beans, which will be available in August, as well as peas and cucumbers.

This summer they also will feature table grapes from Hammonton, corn from Salem County, and cherries and plums from Gloucester County, as well as the one thing they sell that is not from New Jersey: Vidalia onions from Vidalia, Ga.

As for the asparagus, it's a little more tender than usual, Van Daley said, possibly due to the insulation that winter's snow provided.

That's what he was told, at least. He would not know firsthand, since his entire stock was sold by 3 p.m. Sunday, and he would have to make another trip to Salem County to get more.

LProcida@pressofac.comFarm stand grows from 10 acres and whatever Jersey has to offer.
By Steve Prisament Staff Writer Currents of Galloway/Port Republic | Posted: Thursday, Sept. 10, 2009 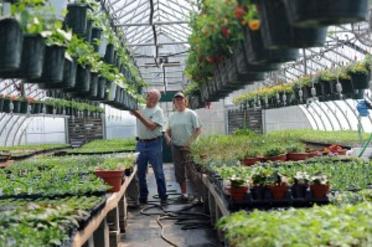